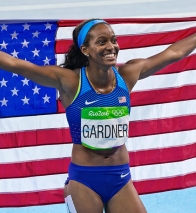 English Gardner is going back to the Olympics!

Gardner, a graduate of Eastern High School and a 400-meter relay gold medalist in 2016, has been added to the U.S. Olympic Team’s relay pool for Tokyo, according to report by Jim Lambert of New Jersey Milesplit.

Gardner raced herself into contention for a relay berth by running 10.96 in the Olympic Trials semifinals – her fastest time since 2016 – and placing sixth in the final.

Being added to the relay pool means Gardner will travel to Tokyo with the U.S. team and be eligible for relay duty in either round. Gardner has more international relay experience than any of the other Americans.

She ran the third leg in 2016 when the U.S. ran 41.01 and won the 400-meter dash final at the 2016 Olympics in Rio de Janeiro despite having to race out of lane 1. Tianna Bartoletta, Allyson Felix and Tori Bowie also ran on that team.

That’s the No. 2 time in world history, behind only then 40.82 the U.S. ran to win the 2012 gold medal in London. Tianna Madison, Felix, Bianca Knight and Carmelita Jeter ran on that team.

With Trials winner Sha’Carri Richardson unable to run the 100 because of a one-month suspension, Javianne Oliver, Teahna Daniels and Jenna Prandini are scheduled to run the 100 in Tokyo, and Jenna Prandini, Gabby Thomas and Gardner form the remainder of the relay pool. Richardson could also be added to the relay pool since her suspension ends after the 100 but before the 4-by-1.

Since Thomas and Prandini are also in the 200, there’s a chance one or both of them could focus on the 200 and drop out of the 100, which means there’s a chance Gardner could be added to the 100-meter dash.

Gardner, 29, battled back from a nasty battle with COVID that nearly derailed her 2021 season to run 11.13 in Maryland in June.

With her 10.96 at the Trials – slightly wind-aided but still very fast – Gardner showed she’s still a world-class sprinter, and with another month of training and getting stronger after her COVID battle, there’s no reason to think she can’t go even faster.